Court Creeden has been called a “master of relationships,” and relationships are the foundation of the business he’s built at Parent Financial.

Now, he’s offering a book about financial success that’s about a different relationship — the one you have with yourself, and your own ideas about what success looks like.

“Almost every single person is trying… to keep up with that sense of what they THINK their life is supposed to look like,” Creeden told Dunstan Group’s Scott Dunstan and Brian Young on their Brandbuilders Podcast.

Blue Goat is about living the life you were born to live, and creating your own path to your own personal idea of success.

Creeden says his insight comes from being a financial advisor to young couples, many just starting families — the focus of Parent Financial.  He realized after talking to so many couples, that their ideas of success were usually set for them by others.

“The ‘reality’ that most people think is going on in the world around them, is really not going on,” he says in Blue Goat. “The people we compare ourselves to, and are trying to keep up with, are trying just as hard to make it and keep up with everyone else themselves.”

In other words, if it looks like your neighbor or friend is more successful than you are, the truth is that they might not really be able to afford the life you see.

“What we’re comparing ourselves against, is what we see people spend money on,” says Creeden. “What we don’t have the opportunity to compare against is everything else going on behind the scenes.”

He blames it on a ‘sheep’ mentality.

“Everyone is just looking at the sheep in front of them, but they don’t know where that sheep is going,” says Creeden.  “We all end up in a big herd, and don’t know where we want to end up.” 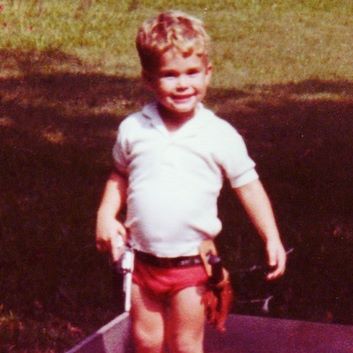 Creeden meets a lot of people who have all the trappings of success, and “feel just as lost as they did when they were 22 years old.”

Being a Blue Goat means living the life you’re meant to live, taking chances, and not being a “couch coward.”

“We need to throw the whole idea of success out the window and ask, ‘What’s your journey?'” says Creeden.  Sometimes that means veering off the main path everyone around you is following, and “getting dirty.”

Or telling yourself, “I’m not gonna miss out on the great moments because I’m so afraid of the bad moments.”

Creeden hopes people will draw inspiration from Blue Goat to live the “one amazing life” they’ve been given — not to be sheep, but be goats running their own paths, being supportive of those around them who also try to find their own path.  And to start building relationships with others — that start with building an honest relationship with themselves.

You can hear all of Court Creeden’s comments to the Brandbuilders Podcast here: https://soundcloud.com/dunstangroup/brandbuilders-court-creeden-blue-goat-life