When your name is the “Hood Hargett Breakfast Club,” there’s one thing you would expect to be at the morning meetings: breakfast. The Breakfast Club is actually best known for bringing nationally renowned speakers to Charlotte for their networking events. But yes, at that early hour, breakfast is an essential component.

COVID-19 has changed the meeting. This month, the speaker was virtual, like so much else in our business world right now. But one thing has not changed: breakfast. Thanks to some creative thinking from Hood Hargett Breakfast Club Executive Director Jenn Snyder Gibson and the Dunstan Group, all Breakfast Club members had a Breakfast Box delivered to their homes in time for their Thursday morning meeting.

“We needed to do something creative, and we needed to try to make this as close to a ‘normal’ event as possible,” says Gibson. “So we needed to have breakfast!”

That meant finding a way to send a pre-packaged, but unique and memorable, meal to 90 members — some as far away as Puerto Rico. And more importantly, to let them know that even during their time apart, they are still valuable members of the group.

The Dunstan Group helped Gibson put together a box of wrapped delicacies from La Tea Da’s Catering: An English Scone with a personal jar of raspberry jam, a candied bacon and pimento cheese muffin, a breakfast nut medley, a clementine, and a Mosaic Cold Brew Coffee. Viola!

The Breakfast Box included some branded items for the “home desk,” too: a customized 2 oz. hand sanitizer, a germ-free key to open doors and push buttons, and a 3-in-1 mouse pad that can also be used as a microfiber screen cleaner and laptop screen protector. These items were all personalized with the Hood Hargett Breakfast Club logo, and every box included a heartfelt note to let members know they were missed.

“I was super excited when Scott Dunstan sent me a video from his office when he got the box in,” says Gibson. “It’s completely first class — down to the paper inside. We’re really proud we put a product out that lets members know we’re thinking of them.”

“A lot of thought went into this, and a lot of planning,” says Dunstan Group President Scott Dunstan. “It’s a way to use branded merchandise to stay in touch, and it’s fun!” Dunstan has been a part of the Hood Hargett Breakfast Club for several years, and often supplies branded merchandise and apparel for events and fundraisers. His creativity and flexibility are what first caught Gibson’s eye, and that paid off here.

“It was a big group effort,” says Dunstan, “and we were happy to make it happen.” He joined the virtual meeting to hear film producer Brett Culp talk about filmmaking as a form of leadership — a way to pull diverse voices into a project and align them with a mission. Future speakers include CBS correspondent Scott Pelley, college football coach Urban Meyer, and former University of Florida and Dallas Cowboys football legend, Emmitt Smith. 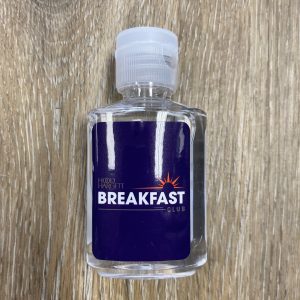 Members also announced the winner of the club’s $1500 scholarship to a local high school scholar-athlete, which is a highlight of every meeting.

We know it’s a new world we live in, when a group whose purpose is to bring people together, has to keep them apart. But the Dunstan Group’s creativity allows relationships to flourish in the toughest of times.

“We’re really proud we put a gift together that lets members really know we’re thinking of them,” says Gibson. “I think people felt really special when they got them.”

Gibson adds that she hopes the group can meet in person in September and beyond. If not, look for more surprises in the mail!